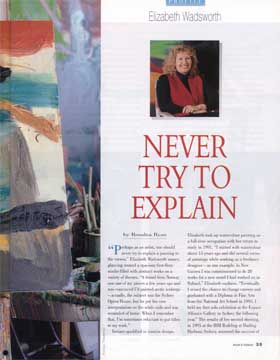 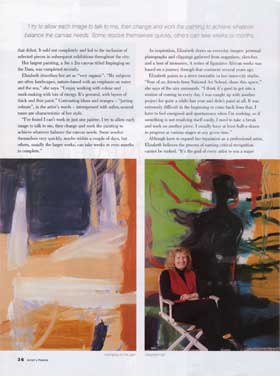 Perhaps as an artist, one should never try to explain a painting to the viewer. Elizabeth Wadsworth muses, glancing around a spacious first-floor studio filled with abstract works on a variety of themes. A friend from Norway saw one of my pieces a few years ago and was convinced I'd painted arctic icebergs actually, the subject was the Sydney Opera House, but he put his own interpretation on the white sails and was reminded of home. When I remember that, I'm sometimes reluctant to put titles on my work.

Tertiary-qualified in interior design, Elizabeth took up watercolour painting as a full-time occupation with her return to study in 1991. I started with watercolour about 15 years ago and did several series of paintings while working as a freelance designer as one example, in New Guinea I was commisssioned to do 20 works for a new motel I had worked on in Rabaul. Elizabeth explains. Eventually I siezed the chance to change careers and graduated with a Diploma of Fine Arts from the National Art School in 1993. I held my first solo exhibition at the Espace Alliance Gallery in Sydney the following year. The results of her second showing, in 1995 at the IBM Building at Darling Harbour, Sydney, mirrored the successs of the debut. It sold out completely and led to the inclusion of selected pieces in subsequent exhibitions throughout the city.

Her latest painting, a 3m x 2m canvas titled Impinging on the Dam, was completed recently.

Elizabeth describes her as "very organic". My subjects are often landscapes, nature based with an emphasis on water and the sea, she says I enjoy working with colour and mark making, with lots of energy. It's gestural, with layers of thick and thin paint. Contrasting blues and oranges jarring colours, in the artists words interspersed with softer nuetral tones are characteristics of her style.

I've found I can't work in just one palette. I try to allow each image to talk to me, then change and work the painting to achieve whatever balance the canvas needs. Some resolve themselves very quickly, maybe within a couple of days, but others, usually the larger works, can take weeks or even months to complete.

As inspiration, Elizabeth draws on everyday images: personal photographs and clippings gathered from magazines, sketches and a host of memories. A series of figurative African works was based on a journey through that continent several years ago.

Elizabeth paints to a strict timetable in her inner-city studio.Four of us, friends from National Art School, share this space, she says of the airy surrounds, I think it's good to get into a routine of coming in everyday. I was caught up with a project for quite a while last year and didn't paint at all. It was extremely difficult at the beginning to come back from that. I have to feel energised and spontaneous when I'm working, so if something is not resolving itself easily I need to take a break and work on another piece. I usually have at least half a dozen in progress at various stages at any given time.

Although keen to expand her reputation as a proffessional artist, Elizabeth believes the process of earning critical recognition cannot be rushed.It's the goal of every artist to win a major prize a Wynne or a Sulman but for now I'm content to concentrate on establishng myself, she says. I'll keep submitting works to the National Art Schools annual Alumni show. I've been fortunate enough to be selected each year and I'm preparing for a couple of other special events. I currently have work at Michael Commerford's gallery in Sydney, too.

Elizabeth is supported in her ambition by her husband Robert, and sons, 17 year old Andrew, an aspiring painter, and his 15 year old brother Anthony, who is a vocalist and musician.

In November, her next solo exhibition, featuring an array of modestly sized oils on paper, will be unvieled at The Forge gallery at Wollombi, in the Hunter region of NSW. Owned by Armando Percuoco, a Sydney restauranteur and long time admirer of Elizabeths work, the gallery is, according to the artist, best suited to pieces on a smaller scale. In preparing for this, I found I had to adjust my sizing back to a size I hadn't worked in for 10 years or more. It was a real striggle at first, and I vowed to ensure that this never happened again. In future I'll work in a range of sizes at once rather than concentrate solely on the larger pieces. I would love to return to watercolur and mixed media eventually and perhaps do more directly with my hands instead of the brush, as I did towards the end of the series.

Elizabeths work will also go on show to a Sydney audience at the Exhibitionist Gallery, Surry Hills, in May 1998.

If that sounds somewhat mystical, so be it - dive into her richly painter, masterly seascapes and it's difficult not to be swept into waves of philosophical musing.

Looking back over her abstract land and seascapes - in the main, aspects of the Australian continent - and you find canvases which are apparently simple on the surface and yet stay in the mind and resonate.

This new collection celebrates and explores the ocean in all its moods and possibilities, from exhilarating to melancholy, all-embracing to terrifying.

At the same time, the nature of abstraction leaves the viewer to that personal interior world of dreaming and imagining which makes works such as these as pleasurable as they are. 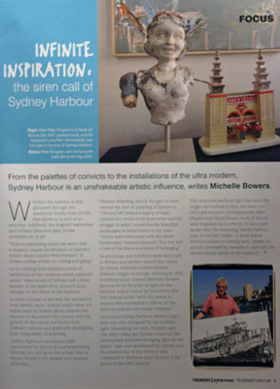 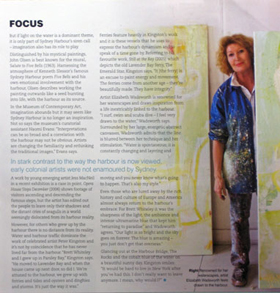 For The Rocks Experience' Magazine Summer 2007/08

From the palettes of convicts to the installations of the ultra modern, Sydney Harbour is an unshakeable artistic influence, writes Michelle Bowers

Whether the harbour is first glimpsed through the sandstone heads, from the 20,000 feet above or is part of an everyday childhood, the fingered waterways and brilliant diamond light invoke sentiment in us all.

There is something about the water that is dreamy, muses the Museum of Sydney former senior curator Peter Emmett. It evokes a sense of loss, of coming and going.

As the driving force behind a series of exhibitions at the museum which explored artists experiences of Sydney, and a keen kayaker in his spare time. Emmett is no stranger to the allure of the harbour.

In stark contrast to the way the harbour is now viewed, early colonial artists were not enamoured by Sydney. Many painted the harbour to document the scenery and the growth of the colony but found both Sydney's natural, and gradually developing built landscapes, uninspiring.

Sydney Harbour's sandstone cliffs surrounded by dry scrub and bewildering flora did to live up to artists idea of beauty found in the tames, lush scenery of Britain.

Thomas Whatling, who is thought to have created the first oil painting of Sydney in 1794 and left behind a legacy of early colonial art, wrote of his frustration and his struggle to paint conventionally beautiful landscapes in letters home to his aunt. Artists were infatuated with the exotic (landscape), explains Emmett, but few had a love of the place or a sense of belonging.

As painting and artefacts were sent back to Britain and settlers joined the colony by choice, attitudes towards Sydney Harbour began to change. Arriving in 1835, travelling artis Conrad Martens became fascinated by the play of light on the harbour and is hailed by Emmett as the first Sydney artist with desire to explore the atmospheric effects of the harbour and his emotional response.

Illustrious Sydney Harbour painter Lloyd Rees was also intrigued by the harbour light. Described his style, Emmett says: He didn't paint the Sydney icons but the atmosphere and ever-changing light on the water. Rees was spellbound y Sydney and the elusiveness of the harbour and harbour and continued to find new ways to paint it for much of the 20th century.

The seductive harbour light has been the trigger for myriad artists, not leat the city's pre-eminent photographers, Max Dupain and David Moore, both of whom were beguiled by its effects. In his quest, Moore shot the haunting Sydney Harbour from 20,000 feet (1966) a work which Emmett admits to having been drawn to, almost obsessed by, because it captures the extraordinary sense of the harbour.

But if the light on the water is a dominant theme, it is only part of Sydney Harbour's siren call imagination also its role to play.

Distinguished by his mystical paintings, John Olsen is best known for the mural, Salute to Five Bells (1963). Harnessing the atmosphere of Kenneth Slessor's famous Five Bells and his own emotional involvement with the harbour, Olsen describes working the painting outwards like a see bursting into life, with the harbour as its source.

In the Museum of Contemporary Art, imagination abounds but it may seem like Sydney Harbour is no longer and inspiration. Not so says the museum's curatorial assistant Naomi Evans: Interpretations can be so broad and a correlation with the harbour may not be so obvious. Artists are changing the familiarity and rethinking the traditional images, Evans says.

A work by young emerging artists Jess MacNeil in a recent exhibition is a case in point. Opera House Steps December (2006) shows footage of visitors ascending and descending the famous steps, but the artist has edited out the people to leave only their shadows and the distant cries of seagulls in a world seemingly dislocated from its harbour reality.

However, for others who grew up b the harbour there is no distant from its reality. Water and harbour traffic dominate the work of celebrated artist Peter Kingston and it's not by coincidence that he has never lived far from the harbour. Brett Whitely and I grew up in Parsley bay, Kingston says. He moved to Lavender Bay and when the house came up next door so did I. We're attuned to the harbour, we grew up with ferried and tides and oysters and dinghies and storms. It's just the way it was.

Ferries feature heavily in Kingston's work and it is these vessels that he uses to express the harbours dynamism and to speak of a time gone by. Referring to his favourite work, Still at the Bay (2005) which depicts the old Lavender Bay ferry, The Emerald Star, Kingston says, It (the ferry) is an excuse to paint energy and movement. The ferries come from another age they're beautifully made. They have integrity.

Artist Elizabeth Wadsworth is renowned for her waterscapes and draws inspiration from a life inextricably linked to the harbour. I surf, swim and scuba dive I feel very drawn to the water, Wadsworth says. Surrounded by her large, energetic abstract canvasses, Wadsworth admits that the line is blurred between her technique and her stimulation. Water is spontaneous; it is constantly changing and layering and moving and you never know what's going to happen. That's also my style.

Even those who are lured away by the rich history and culture of Europe and America almost always return to the Harbour's embrace. For Brett Whitely it was the sharpness of the light, the ambience and intense ultramarine blue that kept him returning to paradise and Wadsworth agrees. Our light is so bright and the sky goes on forever. The blue is amazing you just don't get that overseas.

Glancing out at the Harbour Bridge, The Rocks and the cobalt blue of the water on a beautiful sunny day, Kingston smiles: It would be hard to live in New York after you've had this. I don't really want to leave anymore. I mean, why would I? 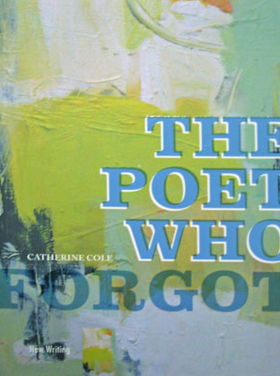 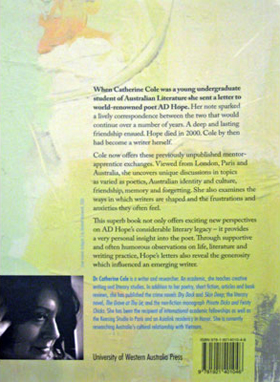 THE POET WHO FORGOT

Elizabeth Wadsworth supplied original artwork for the cover of this collection of new writing by Catherine Cole.

This Superb book not only offers exciting new perspectives in AD Hope's considerable literary legacy - it provides a very personal insight into the poet. Through supportive and often humorous observations on life, literature and writing practices. Hope's letters also reveal the generosity which influenced and emerging writer.